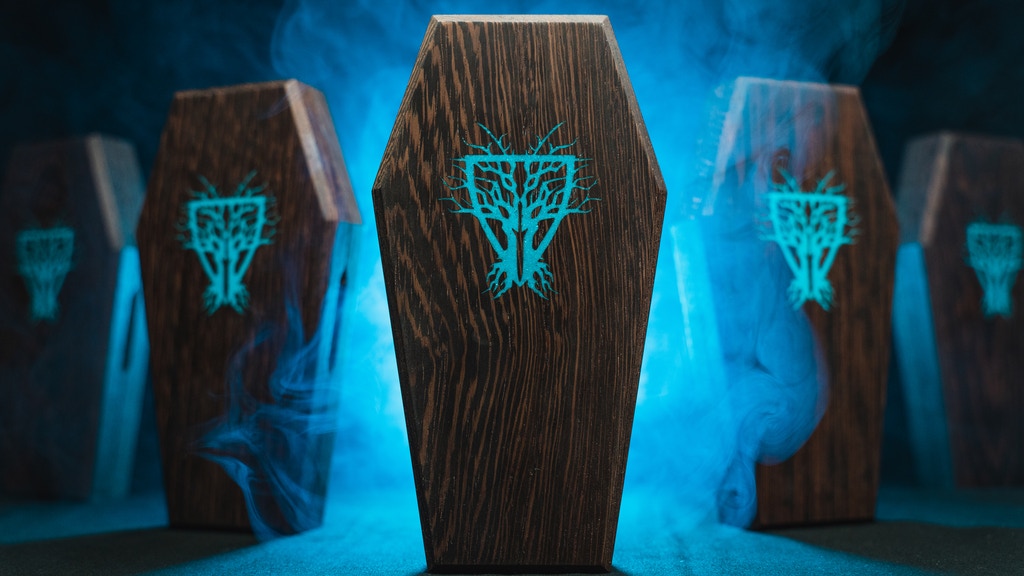 Wyrmwood is back with a new Corrupted Collection for Halloween! Coffin Vaults for your dice, matching Coffin Dice Trays, and all-new Art Trays featuring the artwork of Frank Frazetta and Crystal Sully. Art Trays include hanging hardware to wall mount the piece, with the dice tray walls becoming a striking frame. Art prints, dice and t-shirts are also available!

Latest Updates from Our Project:


Fulfillment has begun, and we've got some numbers to talk about, so if you're into that... great! If not... sorry. Either way, let's get to it.

Fulfillment has begun on the campaign, and to date we have shipped out nearly 400 packages. I say "packages" rather than "orders" because we have a unique situation in this campaign, because of art prints.


In the interest of making sure art prints arrived safely, we decided to ship them separately from everything else in backer orders. This means splitting orders in our shipping software, so that any backer ordering one or more prints would have TWO orders in our system. In addition, in the interest of efficiency and giving backers a good experience, we made one other decision: if you ordered an art print, we're not necessarily going to wait until your fulfillment month to ship it.


The reasoning here was fairly simple: first, all art prints are shipping separately, anyway. We are getting the last orders in shortly for these, and then we will have all the prints necessary for the whole campaign (it doesn't make sense to order them in small batches). Rather than attempt to store prints in a wood shop for several months, when we're splitting these shipments anyway, we're just going to ship them all out as quickly as we can.


So, if you backed on Kickstarter for an art print and are in a May or later tier, you will very likely get your art print early. The rest of your order, however, will ship out according to schedule.


In terms of April shipments, we have 365 shipped, with 624 more waiting to ship. That puts us at over a third of the way shipped through the first tiers (and about 15% through the campaign as a whole). We are getting in the final supplies we need to step on the gas - namely, the special order boxes for our Coffin Vaults and Coffin Trays, and the last of the prints from Crystal Sully, who is working on signing and numbering the limited editions before sending them on to us. Once those arrive, we'll be good to fulfill the remainder of the tier. All of these are expected to arrive within about a week or so, so things look good on that front.

We've been working on the initial waves of the Masterwork Mausoleum, as well. Due to the fact that we opened this item up to anyone that wanted one, we had some concerns about being able to keep these shipping in their intended waves, but looking at the numbers, this shouldn't be a problem. Of course, we'll let you know if that changes. Obviously we'll do our best to hit the target, either way, but everyone that wants one of these high-end pieces will be able to order one.


That said, production on these is proceeding nicely. We do have one note - we had to adjust course slightly from the planned materials. Osage Orange was not available in the quantities we needed, and has been swapped out for another wood that was, one called Yellow Mora. However, they are virtually indistinguishable, as you can see from the following photo of the two - some vendors even refer to this timber as "Argentine Osage Orange" due to the similarity:


[Note that finish will darken the entire piece, which is why the sample on the left doesn't resemble  the finished product photos.]

Given this similarity, we are making the switch across the board and not going to be tracking down Osage Orange, as it just wasn't available in the quantities we need. As always, please get in touch if you have any concerns or questions, but we're confident you'll love these finished pieces.


That about does it for the update. We'll check in at the beginning of May to let you know how things are proceeding. Thank you for your support, and we'll be in touch!


As the title says, it's now April, and we're gearing up to begin fulfillment soon. And, no, it isn't an April Fools' joke. But why am I telling you this, when I can show you instead?

As it stands, we're looking like we'll begin shipping within the next couple of weeks. As a result, we are LOCKING ADDRESSES for April backers on Monday, April 5th. Please make any last minute changes to your address before then!


That about does it for this one - short but sweet. We look forward to finally getting these items in your hands, and thank you for all of your support and patience.


Apologies for this quick update for our pre-order customers (late backers), who also receive all of our updates. Now that pre-orders are closed for this campaign, we'll be going ahead and charging those to catch them up to the rest of the campaign pledges. Pre-orders will be charged on Monday, March 8th.


Again, this only applies to pre-orders, not those of you that pledged to the campaign - you're all already paid up, this just settles for the whole project and will allow us to smoothly move through fulfillment from the first wave to the last pre-orders.


Thank you, and we look forward to beginning fulfillment in just a few weeks!


February is behind us, and April fulfillment draws ever nearer. BackerKit is fully locked down and charged, so we have all the final numbers in hand, at last. Let's see where things stand.


The first part of fulfillment will be coming down the line later this week: digital artwork downloads! We've got all of the art in the campaign in 1440p, and are just getting the files ready to go. You'll be able to access those through BackerKit soon, and you'll get an email notifying you when they're ready.


In terms of physical rewards, we've got parts sourced and suppliers lined up, so it's just a matter of finalizing the orders and getting everything in that we need for the project. That's all in progress, which leaves us on track to produce and begin shipping in April, as planned.

Recent episodes of our vlog, Wyrm Lyfe, have detailed some of what we've got in store for our next campaign... a follow-up to the Dice by Wyrmwood campaign! We've got a LOT planned, and we're really excited about it... we're going bigger and better, and we think you're going to love it.

More information to come soon. We'll keep you posted as the beginning of fulfillment draws ever nearer!


BackerKit was set to lock down yesterday, January 31st - however, it appears as though there are still some stragglers and we wanted to give them just a little bit more time. So we've extended it a couple of days.


You should all have already received a 48-hour reminder from BackerKit today, informing you that your order will be locked on Wednesday. Following that, orders with outstanding balances will be charged according to schedule on Friday of this week, February 5th, so keep an eye out for that. If you have any last minute questions or need help with your order, now's the time to reach out and let us know!


Later this week, we'll be able to get together and plan out the production timeline for fulfillment. We'll have more information soon on how that all looks. Fulfillment is set to begin in April, in just a couple short months. If February and March go by as quickly as January did, it'll be here before we know it!


For now, just be sure to hop on and make any last minute changes, double-check your order one last time, and submit it when it's all ready. From then on out, it's all up to us!